"L'Enfer du Nord" ("The Hell of the North"), "The Queen of the Classics", "A Sunday in Hell" - call it what you will, Paris-Roubaix is legendary for being a tough classic race. It stands at 255km in length, with 52.8 km of rough, French pavé (cobblestones) - starting in Compiègne (60km from Paris), and ending in the velodrome in Roubaix. A long, tough day in the saddle with endless dust when it's dry, an epic, iconic mud-bath when the weather turns bad.

With this in mind, when there was talk amongst CS Grupetto of tackling first the Ronde van Vlaanderen, and then Paris-Roubaix this year - I was quite enthusiastic. The entry form for the Ronde was quickly submitted, but my Paris-Roubaix form dwelt under my keyboard for a few days, not something to be taken lightly. It eventually did get sent, and the fear began there.

The feeling you get the night before a big sportive, or a big ride, "the fear" that is instilled in you tends to heighten the senses at the start of any such event. I've never had the fear days before an event other than with Paris-Roubaix. Most of the conversations I had with friends, those of whom ride, and those that did not, featured words like "nervous", "apprehensive" and suchlike. Not to mention that I ended up getting my new Cervélo R3 only a week before the event - nothing like a bit of uncertainty as to how you'll be on the bike to add to any nerves.

After a relatively standard coach journey, travelling with the guys over at Sporting Tours, where we'd only had a few delays, we arrived in Compiègne. Saturday was a relaxed day - lovely weather, a few minor hiccoughs requiring some attention (Wayne had brought the wrong shoes, Hippy had lost a bolt from a brake pad, James needed some new cleats), we rolled along to the start of the route in Cambronne-lès-Ribécourt to check the distance to the start. To avoid bike assembly during the early hours of Sunday, we'd decided to ride to the start. After all, what's sixteen more kilometres on 255? After the required sundries (a beer), and sportive requirements (going to the sign on), we had the most paltry pre-ride meal I've ever had. Some (relatively dry) fish, salad, and pasta. Many baguettes worth of bread were wolfed down to try and ensure that our bodies would have the fuel they needed for the next day. After a wander to a slightly questionable French bar, where the locals hurled darts at a machine making noises like Pacman games, we retired for the night. Sleep was a luxury that came in short bursts.

It looked like we'd have alright weather, 4:30 AM on Sunday looked overcast, relatively cool, but - most importantly, dry. After a breakfast, where the small buffet was descended upon by vulture-like cyclists, hurling coffee, pain au chocolat, and croissants down their throats, we rolled out. Dave, hippy, Tom and I led a small peleton through Compiègne, and down to the départ. It seems like Grupetto did most of the work on the front for this stretch (GPS data) - however, the legs felt good.

Typically, for the start of a sportive, a short rain shower greeted us, so we set off together, and got into a huge peleton. The pace was high, much higher than I was envisaging riding at. We'd talked 30km/h on the flats as an average, but the group was going much harder, we'd hit 40km/h on the flats, and as gaps opened it seemed to fall to me to bridge. Riding with so many unknowns, with so many languages, the shouts went up -- "Auto!", "A droîte!", "Klaar!" -- shouts at junctions bounced around between French, English, Italian, and merely nonsense. Luckily, there seemed to be few crashes. The first 80km of the route is pavé free, but rolls -- it's not as flat as you'd think. Snatched conversations between the Grupettos went along the lines of "I'm not going to have the legs for this all day!", "We'll drop out the back at the first feed, let's get the pull." -- I'm glad we did. We arrived at the first feed fragmented, and shoved food, and drink down our throats. Eating not out of hunger, but out of nerves - we'd pushed quite hard, was this going to punish us later in the day? 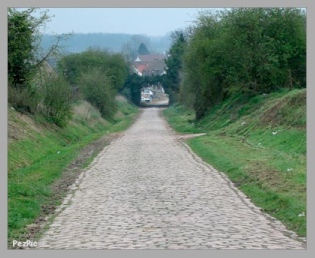 "Secteur pavé!" ... At Flanders, the pavé is amusing - it adds interest, and a challenge to the route. As you ride it, you must concentrate, trying to keep the cadence high, and the bike in check -- adjusting your hands to deal with the vibrations from the bike. When you hit Paris-Roubaix pavé, there is no amusement, you smash into the first sector, trying to keep your cadence high. Immediately as we hit it the first sector, "Bidon!", a bottle went flying from my bike - no chance to stop and pick it up. The bike shook so much my front quick release loosened -- could have been a disaster, but luck was clearly on my side. The dust came up in plumes, and coated the bike - with the valleys between the huge cobbles being smoothed by the dust, we kept a decent pace up.

And then it rained. In fact, rain is an understatement, it poured -- thunder rumbling, and lightning flashing. Water coating the road surface. The amount of spray coming off the road was unbelievable, muddy, oily water smashing you in the face. Unable to see anything through ineffective sunglasses, switching to equally useless glasses - a hindrance required for the small matter of sight! The pavé became a whole new terrain. As the water started to form rivers down the side of the secteurs, coming downhill on the huge, loaf-sized cobbles was hair-raising. I've never been so out of control on a bike - impossible to brake, impossible to change hand positions. Shifting weight around to react to the back end sliding around. You do not choose the course that you take on such sectors, the pavé chooses for you. At this point, I was still feeling human, the legs were good, my hands worked.

After the second feed, where cyclists sheltered in the playground of the school (which had a pavé driveway up and down to it!) - we hit another secteur of pavé, just as brutal, but wet, and coated with mud. The gaps between the cobbles, earlier disguised with dust, were now yawning chasms spewing mud up onto the cobblestones. Picking a line was impossible, with cyclists of different speeds on the road, you had to, slowing down merely elongated the pain. Hitting a large patch of mud, the bike went left, I went down. Not too hard. Another rider went straight over the top of me. Loud shouts came up - broken English, Italian, my terrible French - apologies, queries as to my wellbeing - just another victim of the pavé - bike seemed fine - adrenaline thumping I caught up with the other Grupettos, sheltering under a tree. Dave (very kindly) squirted water on the cuts on my arm - I was in post-crash mode, keep moving, punish the pedals. The bike seemed fine (other than some chain rub, that was just due to me not knowing how to trim SRAM Red, thanks Dave!), and did actually survive well. 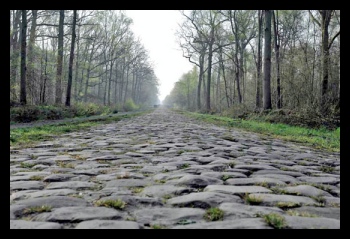 Along the route you recognise corners, roads you've seen on the coverage, how on earth did they keep their pace up over this?! Regrouping after the cobbles, you lose count of the secteurs. By the final feed, the humour has gone - 220km in to the route - legs feel good, upper body is agony. You can no longer grip, stuffing food into your mouth becomes pain. The muscles in your forearm feel ripped. All you can do is concentrate on what's left.

Hitting Le Carrefour de l'Arbre is brutal. It's decisive in the race. It smashes into you, relentlessly, cruelly. The war of attrition between you and the road is unbelievable. It seems endless. By now, my pace on the cobbles was a crawl. Endlessly being dropped on the pavé, in a group of Scots, and then putting the pressure down to catch the group, and have some respite on the roads. Pulling the group my legs felt good, hitting the cobbles, I was ready to cry. There's nothing to count, there's no way you can tell the distance. You just have to keep a cadence going and stay upright. At the end of Le Carrefour de l'Arbre, someone snaps your photo. The pain is too much - there's no posing like there might have been at the start of Arenberg, and no chance for a photogenic grimace like at Flanders. A rider from our tour passed me - "I've made up two minutes on you on this sector.", "F**k off, I don't give a flying f**k" - there's no courtesy, the comment was harmless enough, but you're suffering, there's no blood for your brain to restrain your mouth. The road continues to smash into you, then, tarmac. Someone holds out an segment of orange. I have never been more grateful for something ever, it's probably a good idea it was on the move, I'd have kissed the girl that handed it me otherwise. Coming off Le Carrefour, I met with Dave and Tom again - Dave posed a question - "Are we going?" - "Just f**king drop me, I'll see you in Roubaix".

"This is the last sector!", you propagate the myth, diving for a tiny slither of muddy gravel at the side of the cobbles, you're through it. There's a bunch of fans at the side of the road. "Alllez!", I dug in, really wanting to finish with Tom and Dave - we'd stuck together this far. Counting down the final kilometers. Finally, that long, straight road into Roubaix. Riders congratulating each other. Then the turn, the curve into the velodrome. This was my favourite part of the day - the blue and white of the Grupetto (and Nhatt from Brixton Cycles) standing on the corner, shouting, sweeping around the bend onto the curved banking. Tom up on the sprinters line, me sheltering in the cote d'azure - kicking. Finished. Handshakes. Hugs. Wow.

Then the new aches start. But there's euphoria. You buy a cobble, you have a beer. There's a definitely sense of achievement. It's a war of attrition that you've beaten. There's no talk that you'll do it again, at least yet. You just want food, a bed, and some decent company. Both on and off the bike, the members of the Grupetto are brilliant - I felt that we did a terrific job, and it once again made me proud to ride with these guys.