Progress with Error Handling for BGP

It's been quite a while since I updated this blog, very lax of me, sorry!

The lack of updates appears more indicative of how busy I appear to have been since presenting the error handling draft work at NANOG (which looks to be the last post!). Since January, I've presented at the IETF in Prague, and then again in Québec City - particularly on a number of aspects of the work that I've been documenting here for some time!

The good news is - we're making some significant progress. Over the last 6 months or so, the work that a number of operators have done, as well as work being focused from particular vendors has been focusing us towards how robust BGP needs to be to meet the operational requirements of the protocol right now. At IETF 80 in Prague, I presented at both the Global Routing Operations WG and Inter-Domain Routing, on the draft that I've described in the presentations linked in previous pages. For those that are interested, the slides for this are linked below. 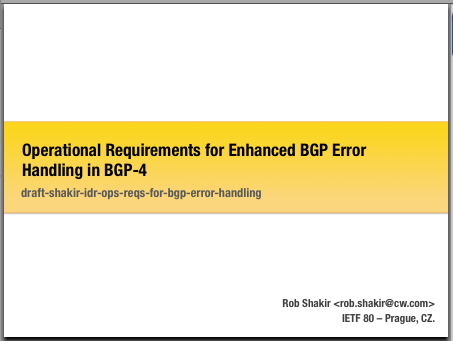 The response, both at NANOG, and at the IETF meeting to this work has been very positive - I think as I’ve tried to characterise, there are a lot of operators that understand that this is an issue. Also - and perhaps somewhat surprisingly to me, there are a lot of vendors/implementors of protocols that also agree that this behaviour is very sub-optimal in numerous network deployments. There is significant appetite in the IDR working group to try and solve this issue in a deployable, scaleable manner - which is fantastic. Since BGP is the signalling glue for the Internet, and most modern IP networks, then it’s really good that we are able to provide some focus for this issue, which, at the end of the day, will result in a more resilient set of networks.

In addition to such enthusiasm in the IETF IDR working group, GROW accepted the draft that I put together as a working group document - which is great, GROW’s charter is almost to provide IDR work items that come from the operations area of the IETF. Pushing these requirements from GROW into IDR, whilst it might sound a bit like just internal workings of the IETF, gives some further credence to the fact that this is required by operators. Given all the discussions that I have had with operators about this issue, and how much of an issue I know this to be, I think that having the IETF process work on this the right way is great. This adoption means that the draft is now called draft-ietf-grow-ops-reqs-for-bgp-error-handling - and is progressing really well - I can’t thank a number of people, including Bruno Decraene, Shane Amante, and David Freedman enough for their excellent discussions and suggestions on this subject - IMHO, such inter-operator collaboration is fantastic to see in terms of generally improving the operations, robustness, scalability and management of IP networks in general - and is of huge benefit to both the Internet and general network operations.

But, of course, just a requirements draft is not going to solve the issues that exist in the protocol - however, it does give a framework that gives us something to work around. As such, the point of this post is to point out to any operators that might read here, and not the IETF mailing lists, what actual progress we’ve been making in the IETF!

Overall, I think we're really making some good progress on this one - I'm hopeful that the requirements draft can be cut and dried, and go to GROW WGLC prior to IETF 82 in Taipei! From then on, I think, as a community, we're really driving some good solutions that, at the end of the day, are going to improve the stability, robustness and operations of the Internet!

As always, comments (via the re-enabled form below) or via e-mail are greatly appreciated - I'm really keen to ensure that we're hitting the right requirements here!